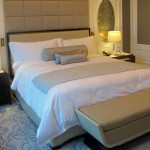 Many luxury hotels in Macau casinos still have rooms for CNY

A number of Macau’s luxury casino hotels still had rooms available for each night of the upcoming Chinese New Year (CNY) holiday week as of Thursday, according to checks by GGRAsia.

China’s State Council this time designated the holiday period from January 31, a Monday – the eve of the Chinese New Year – to February 6, a Sunday.

GGRAsia’s occupancy survey relied on information collected from the official reservation websites of the relevant casino hotels. As of Thursday, 16 of the 22 local five-star hotels – mostly establishments located at Cotai casino resorts – still had rooms available for each night of the holiday season.

Others sold out for at least three nights were: Banyan Tree Macau and The Ritz-Carlton, Macau, both at the Galaxy Macau casino resort in Cotai, as well as StarWorld Hotel on the peninsula, all promoted by Galaxy Entertainment Group Ltd; and The Londoner Macao Hotel, in Cotai, promoted by Sands China Ltd.

Six of these seven hotel sites are in the five-star category. The exception is the Londoner Macao Hotel, which is classified by the local tourism authority as four-star accommodation.

Other casino resorts that were investigated included: Grand Lisboa in the Macau Peninsula and Grand Lisboa Palace in Cotai, both promoted by SJM Holdings Ltd; MGM Cotai’s M Tower; and Wynn Palace on Cotai, promoted by Wynn Macau Ltd.

The other hotels in the survey were: Nüwa, Morpheus and Grand Hyatt Macau, in City of Dreams Macau, Cotai, as well as the two hotel towers of Studio City in Cotai and Altira Macau in Taipa. All of these sites are promoted by Melco Resorts and Entertainment Ltd.

GGRAsia also carried out checks on the following hotels: Sands Macao, on the city’s peninsula, and the Venetian Macao, the Parisian Macao, the St Regis Macao, the Conrad Macao, the Sheraton Grand Macao and the Four Seasons Hotel Macao, all located in Cotai, and all promoted by Sands China Ltd.

The GGRAsia hotel survey further indicated that some of the five-star hotels covered – including several already booked for three of the holiday nights – were from Thursday, offering standard room stays for less than HKD 2,000 (257 USD) for future holiday nights. This is according to information available through their respective online booking engines.

For the year 2021, the average room rate in three-star, four-star and five-star hotels in the city was MOP 834.50 (USD 104), down 9% from 2020, according to the hotel survey. conducted by the Macau Hotel Association and recently published.

In 2021, the average room rate for five-star hotels covered by the association was MOP 1,015.40, down 23.8% year-on-year. the The Macau Hotel Association has 40 member hotels, mostly in the five-star category, and located inside the city’s casino resorts.