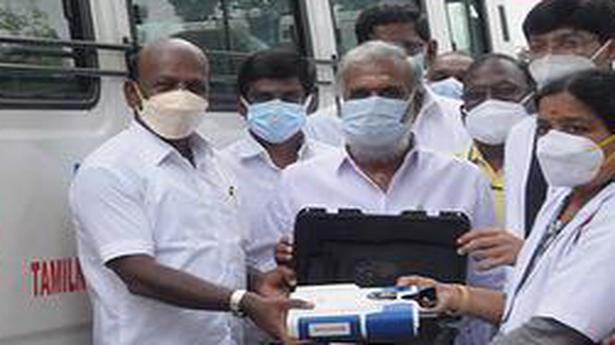 Health Minister Ma. Subramanian on Tuesday called on luxury hotels to avoid holding New Year’s celebrations due to the steady rise in new cases of COVID-19 in Chennai.

Speaking to reporters here, he said that in a letter to all states, the Union’s Home Office stressed the need to take action to control the transmission of the contagion.

â€œIt was advised to avoid New Years celebrations … There are many star hotels in Chennai. Many people could participate in the New Year celebrations, if they were organized. At the moment, there are no advertisements or announcements. Hotels will understand that they have a social responsibility. We ask these hotels not to organize such celebrations. We hope they will treat our appeal as an order. However, the police and local bodies will monitor such events, â€he added.

To date, Tamil Nadu had 34 confirmed cases of the Omicron variant of the novel coronavirus that causes COVID-19, Mr Subramanian said. â€œAmong them, 22 people had been released earlier. On Monday evening, seven people were released. Only five people are under treatment in the hospital and they are doing well.

“The patients are doing well”

He said 118 people, whose samples showed the dropout of the S gene (an indication of the Omicron variant), were also doing well in the hospital and that results from genome sequencing of their samples were awaited.

Mr Subramanian said COVID-19 cases were gradually increasing in Chennai. â€œWhile the number has declined in many other districts, it remains over 100 in Chennai. I ask all people to guarantee 100% use of the mask. It is a source of concern that only 32% to 33% of slum dwellers wore masks and 57% to 58% of those who visited shopping complexes used masks. People should make sure they wear masks once they leave their homes. The people of Chennai should set an example for others, â€he said.

Previously, he had reported multipurpose mobile ophthalmology vehicles to the Regional Ophthalmology Institute and the government eye hospital. The launch of multi-purpose mobile ophthalmology vehicles by district was announced to the Assembly. â€œFive vehicles have been announced and three have been launched. The other two will be used soon. A total of 90 lakh has been spent for the three mobile units which will cover Salem, Ramanathapuram and Tirunelveli, â€he said. These units would help identify people in need of treatment for eye disorders.

â€œNationally, the prevalence of visual impairment in people over the age of 50 is 1.19%. The rate is 1.18% in Tamil Nadu. There are cases of cataracts and diabetic retinopathy in rural areas, â€he said. These units would camp in the villages and screen people.

The Minister of Hindu Religious and Charitable Endowments PK Sekarbabu was present.