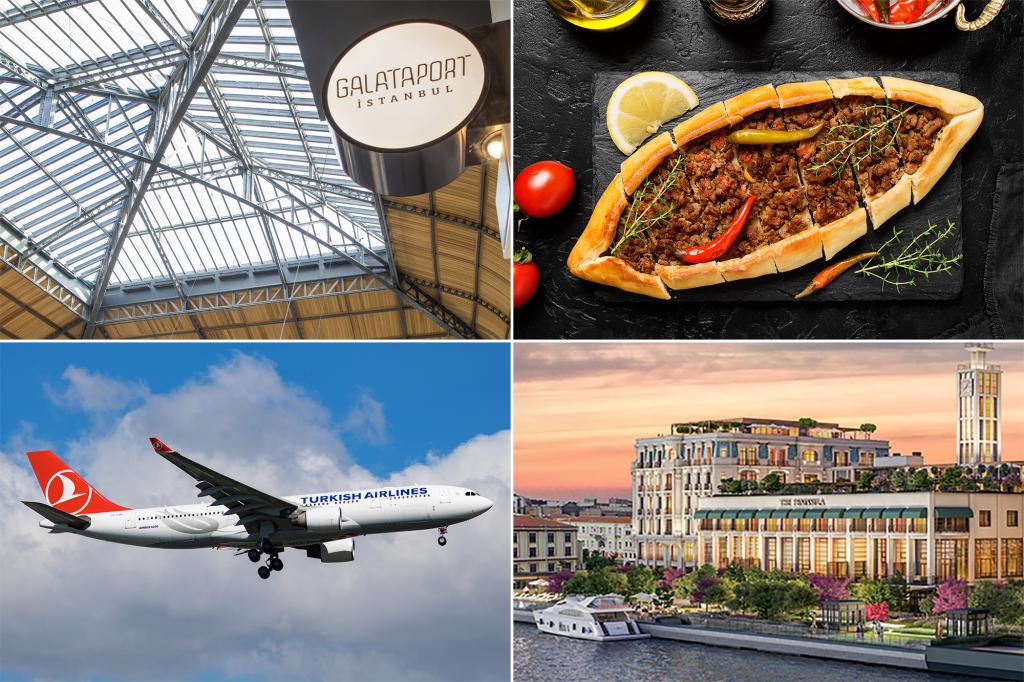 Last summer, the American billionaire’s crew, led by Bill Gates and Jeff Bezos, headed their yachts to the Turkish Aegean Sea to frolic in the azure waters off Dalaman and Bodrum.

This year we hear that yachts will stop near revitalized and revitalized Istanbul, where they will refuel their boats, take in the views and shop till they drop.

Here’s our guide to Istanbul’s best hotels, restaurants and shopping districts (so you can visit them before they appear as backdrops in a TMZ shoot).

After all, the city is one of the few world capitals where you can travel like the yacht crowd – with or without the billions.

Istanbul can be an overwhelming place – there’s so much to see and do, eat and drink and, of course, shop. While strolling through the Grand Bazaar or the Spice Bazaar alone is magical, if you’re pressed for time or want to get your bearings first, or if someone tells you the meaning of – well, everything – you may want to hire a guide. Our choice ? Istanbul Tour Studio.

Founded by Sinan Sokmen, a hospitality professional married to the former editor-in-chief of Vogue Turkey, the company employs art historians, archaeologists, foodies and fashion consultants to guide you not only in Istanbul but all over Turkey.

Guides take you beyond the basics and show you the real beating heart of this ancient city’s cafes, tea gardens, bazaars and traditional workshops.

Until recently, the Galataport in the Karakoy district was an intimidating eyesore – filled with warehouses, a worn ship terminal and an overgrown park. But the area has turned into a showpiece on the Bosphorus. The result redefines Istanbul’s urban space and is simply awe-inspiring.

The cruise port, which can accommodate three extra-large ships (not to mention the smaller private yacht port nearby) is now underground, so those long lines of passengers and luggage no longer spoil the view of the Palace of Topkapi or the Asian side of the city.

Spanning a three-quarters of a mile coastal strip, the mixed-use development will include offices as well as 250 retail and restaurant establishments, including some inside the former post office, which was renovated to keep its original footprint intact.

A once overgrown park has been transformed into an open space where families gather and musicians play – all next to the Renzo Piano-designed Istanbul Museum of Modern Art and Istanbul’s Painting and Sculpture Museum. Istanbul Mimar Sinan University of Fine Arts.

The Grand Bazaar is the largest and oldest market in the world, filled with timeless pieces made by Turkish artisans. Warning: the place is huge. And overwhelming. But it’s worth the cost. Especially the Cevahir Bedesteni (aka the Old Antique Bazaar), which dates back to the 15th century. It still retains some of its original warehouse design and has over 120 stores selling all kinds of handcrafted treasures. Pro tip: Look for Turkish bath towels that cost pennies compared to what they sell for in the US, as well as ceramics and (yes) rugs. Don’t be afraid to negotiate and sit down for a cup of tea while going for the kill.

Near the historic Galata Tower is a small cobbled street filled with boutiques and small shops offering the best fashion Istanbul has to offer. There are no Zara’s, H&M’s or other international brands, just trendy places to browse, including the Arzu Kaprol boutique, Atelier 55 or the antique-filled Kashif Sofa.

If you really want to feel like a sultan, why not stay in a sultan’s house? The Ciragan Kempinski, the only Ottoman palace and hotel along the Bosphorus, was built by Sultan Abdulaziz in 1872 as his family home (although he only lived there for four years before he was mysteriously found dead in the interior after being dethroned).

The palace fell into a state of disrepair until the 1990s when it was turned into a hotel by developers, who thankfully left its grand architecture intact. A stay here is a truly unique experience, as everyone who walks through its doors is treated like royalty.

Come for the views and architecture and stay for the impeccable service and food, some of which is straight from the Sultan’s original menu. Although over 200 years old, the Ciragan Kempinski also has the amenities a modern-day VIP might need: a helicopter pad, a new yacht dock and plenty of electrical outlets.

Later this year, the peninsula will open its first Istanbul outpost, right on the edge of Galata Harbor (so well-heeled cruise passengers can walk straight from the ship to their five-star hotel). Designed to complement the nearby historic post office, the hotel features classic architecture, 177 rooms and a Turkish spa.

This magnificent hotel opened its doors in November 2019, just in time for a global pandemic. Comprised of two Ottoman-era mansions on the banks of the Bosphorus in the Sariyer district north of Sultanahmet, the “boutique” hotel reopened late last year, offering 45 rooms, some with fireplaces. Particular attention has been paid to the original architectural details of the old residences. The result is a true urban resort with spas, a commitment to sustainability, and a houseboat to take you and your friends on a sunset cruise along the Bosphorus.

The new restaurant inside the Gaglogu Hamajmi, a 300-year-old hammam, is a jewel, a real secret garden hidden in the hubbub of the Cağaloğlu district. To get there, you have to go through the hammam, enter a corridor in the shape of a rabbit hole and finally walk through this hidden restaurant, which has a beautiful terraced garden overlooking the old domes of the hammam. While everything on the menu is spectacular, the Turitli Pide (which visually resembles a Turkish calzone – fresh bread stuffed with ground lamb) is a must. It is served with assorted side dishes of bone broth, sour cream and fresh oregano, all of which should be added to the Pide before eating. The result is a little messy but miraculous – a dish we still dream about every week.

This historic restaurant inside the Spice Bazaar founded by PanDeli Çobanoğlu, reopened in December 2018 – but it’s been open somehow, serving traditional Istanbul cuisine, since the early 20th century century. PanDeli was renowned for nurturing the likes of Mustafa Kemal Ataturk, Queen Elizabeth II and Audrey Hepburn. The new owners have retained the original ambiance and core menu, while adding a few new must-try dishes, including sea bass baked in paper, to give on pastry (su boregi) and hamsi pilav.

The intimate wine bistro, in the SuB Hotel Karakoyis a huge cult hit with locals according to Sokmen, due to its unusual pairings of natural local wines with creative dishes that reinterpret the region’s endangered culinary delights, including lakerda (marinated bonito) and topic (the ever-popular Armenian dish consisting of a potato and chickpea shell filled with a paste of onions, currants, pine nuts and tahini).

While in Istanbul, you must try Lahmacun — Turkish street food that looks like pizza. Made with minced meat on one slice, it’s topped with lettuce, lemon, parsley and paprika and is utterly delicious. Look for a place with a very long line of inhabitants and dive in!