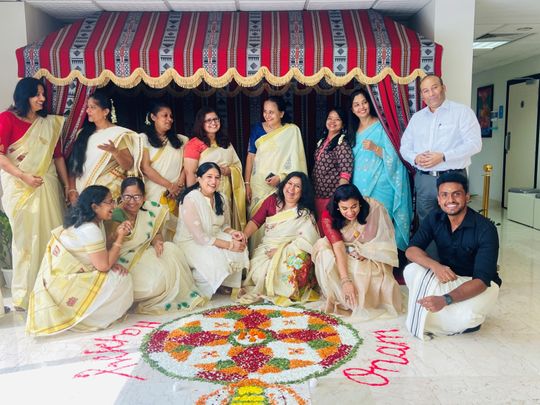 Kerala vegetarian feast takes over the kitchens of homes, restaurants and five-star hotels as Malayalis celebrate Thiruvonam in UAE

Dubai: Kerala sadhya, the vegetarian feast spread on banana leaves, has taken over the kitchens of homes, restaurants and five-star hotels in the United Arab Emirates as Malay expats in the southern Indian state were celebrating Thiruvonam on Thursday.

Thiruvonam is the most important day of the 10 day long Onam harvest festival. It celebrates the mythological return of King Mahabali or Maveli, whose reign marked the golden age of the state, according to Hindu beliefs.

Celebrated by Malayalis around the world, regardless of their religion, Thiruvonam falling on a working day this year meant that most of the United Arab Emirates’ million strong Keralites savored sadhya, the highlight of the festival, made in restaurants.

Traditionally the sadhya consists of a minimum of 12 to a maximum of 30 items and it is customary to do the sadhya at home. However, only a few like the family of Dubai resident Maneesh G managed to make it on a working day. Maneesh and his family celebrated Onam with his friend Thazhe Purayil Sajith, whose family is back in Kerala.

“I could have had sadhya at any of the hundreds of restaurants that offer it today. But, when Maneesh invited me for the house sadhya, I couldn’t resist,” Sajith said, a project manager, at Gulf News.

There were also families of friends doing sadhya together and celebrating Onam in a grand way.

“It is a special Onam for us as we are celebrating the first Onam of our son Devrath who was born last year,” said Balagopal G, who celebrated Onam with the families of three of his friends.

“We wore our ethnic robes and all went to the temple in the morning. Then we made pookkalam and cooked sadhya. We taught the children about the different items served in the sadhya and had them served according to the customs. We also had Onam games. The kids had a great time,” he said.

However, people like Priya Vishnu, a graphic designer, found it wise to order sadhya from a restaurant due to the lack of time to prepare it for many guests on a working day. “We were 11 in total including my friends from other Indian states. So, I thought of ordering some sadhya from Foodies Junction, a restaurant near our flat,” she said.

Nationals of the United Arab Emirates, other expatriates

Several restaurants and offices across the UAE have seen people of different nationalities enjoying sadhya with their Malayali colleagues.

Febin Shams, a human resources professional, accused her Emirati colleague Suzan Al Mulla of doing a sadhya in a restaurant. “It was my first experience. We waited 20 minutes just to enter the restaurant. I liked the banana chips and the mango curry the most. The waiters and guests wore traditional outfits and I really felt like I was in Kerala,” Al Mulla said.

Philip Borbon from the Philippines, who had a sadhay with his colleagues at his office, said, “It was fun to eat the Kerala dishes with colleagues. It was a new experience for me. I always like to eat spicy food. But, I didn’t find it very spicy. It had different flavors,” said

According to the Dubai Municipality, a large number of food establishments in Dubai are owned by Malayalis. Most restaurants and hypermarkets serving the larger community were offering sadhyas for meals and takeout on Thursday. Some have extended it for the weekend as the celebrations will continue to be in full swing over the weekend.

“We brought in famous Malayali chef Pazhayidom Mohanan Namboothiri to prepare this year’s sadhya. At the request of the public, we have extended the sadhya home delivery and takeaway offer until Sunday. Apart from that, we sold 920 tons of vegetables and 35 tons of fresh flowers which were specifically imported for Onam,” Nandakumar said.

While most restaurants rolled out the explosion of flavors on banana leaves laid out on tables, restaurants at five-star establishments like Taj Jumeriah Lake Towers customized the presentation to give a chic sadhya look.

“We have to be very careful about hygiene, cleanliness and presentation. So, we presented sadhya in traditional Indian thali style by putting dishes on fresh banana leaves kept on the thali plate. Everyone including our in-house guests from other countries loved it,” said Hasan Shaikh, Restaurant Operations Manager, Taj, JLT.

The Dubai Municipality has made special arrangements to ensure food safety is maintained during the preparation, packaging and delivery of the sadhya, said Bobby Krishna, Senior Food Safety Specialist.

“The cook-chill process has been adopted by outlets preparing bulk sadhya. This is a proven measure to ensure food safety with extended shelf life. It has also proved effective in the case of bulk preparations of sadhya,” he said.

Wearing ethnic outfits and putting floral decorations (pookkalam) on the floors of homes, offices and schools, Malaysian expats celebrated the festival with glee.

In Indian schools like GEMS Our Own Indian Schools, students celebrated the day as an ethnic day by wearing traditional Onam dresses, playing Onam games and doing pookkalam.

Balagopal G and his family during their Onam celebration in Dubai on Thursday.
Image Credit:

Luxury hotels get creative for families as multi-generational travel returns