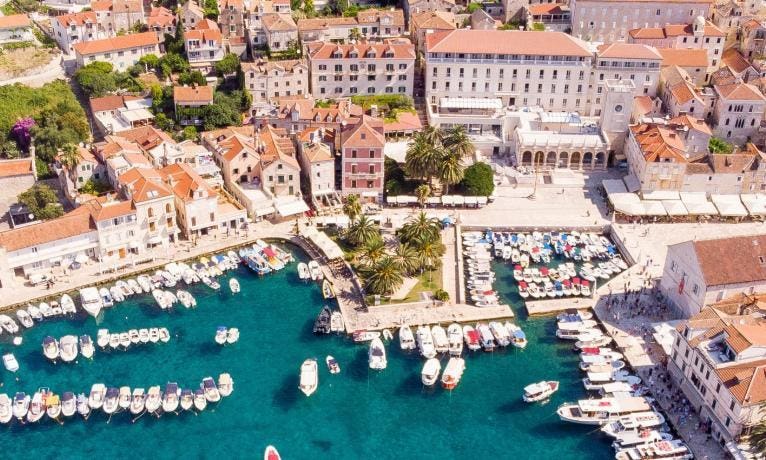 The best luxury hotels on the Croatian coast

What was once an inside secret has been shouted from the cover of every travel magazine in recent years: Croatia is one of the best beach destinations in the world.

Not only does the country offer a fascinating and layered history, but the crystal clear waters surrounding its more than 1,000 islands are ideal for swimming, sunbathing and sailing. And now, Croatia’s luxury food and hotel scenes are finally catching up with its jaw-dropping natural beauty.

From Dubrovnik (aka “the pearl of the Adriatic”) and the dreamy Dalmatian islands in the country’s southern region, to magical Rovinj on the northern peninsula of Istria, here are the most lavish hotels along Croatia’s stunning coastline.

This historic five-star villa built in 1913 offers stunning views of Dubrovnik’s Old Town from its restaurants, bars, swim platform, pools and chic rooms. Plus, its prime location puts you just a five-minute walk from the city’s historic medieval walls.

Pamper yourself at the serene spa, which overlooks the sea and features a large freshwater pool, Jacuzzis, steam bath, Roman bath and Finnish sauna.

Drop by Abakus Piano Bar – one of the best sea-view bars in town – to browse black-and-white portraits of royals, starlets and other glamorous celebrities the Excelsior has hosted over the years, including Queen Elizabeth II and Elizabeth Taylor.

Across Dubrovnik’s Old Town is Hotel Bellevue, another five-star hotel with stunning sea views. This luxury property is perched on a cliff overlooking Miramare Bay. Panoramic views of the Adriatic and private pebble beach — a rare sight on the rocky Adriatic — give guests a private, secluded feel away from the bustling activity around the city walls.

Floor-to-ceiling windows and sleek, airy interiors in tasteful neutral tones add to the serene vibe. But whenever you’re ready to explore, simply stroll to the famous Pile Gate to enter the walled city.

Head to the idyllic island of Korčula to visit this unique Relais & Châteaux property housed in a former 18th-century Episcopal Palace.

The historic property has just six luxury “residences” that pay homage to the island’s rich history: Marco Polo once called it his home, and the island is said to be the origin of the Silk Road. Each of the meticulously renovated 1 and 2 bedroom apartments (all with sleek modern living rooms and kitchens) are designed after stops on the Spice Route: Venice, Sumatra, Ceylon, India, China and Arabia.

Not to be missed: dinner on the terrace at LD-Restaurant – one in 10 Michelin starred restaurants in Croatia – and a private tour around the island in Lešić Dimitri’s beautiful sailboat.

This elegant historical monument – a fine example of Venetian and Austrian architecture – is one of the first sights that greets you as you enter the port of Hvar. The distinctive and majestic hotel overlooks the marina and the main square. Above rises the medieval Spanish fort, which glows gold at night.

Palace Elisabeth was Hvar’s first five-star hotel, and its pedigree is indeed royal. In the 13th century, a ducal palace was built on the site. Then In 1899 it was rebuilt as Spa Hotel Empress Elisabeth, named after its patroness, the famous Empress Sisi, Elizabeth of Austria. The current name is a nod to the rich history of the property.

Dine or sip cocktails on one of the hotel’s terraces to admire the marina, nearby islands and town square, and watch Hvar go by.

No need to worry about booking D-Resort early enough to get a room with a sea view. This modern wonder located on a small peninsula in Šibenik Bay is surrounded by water on three sides. Each of the 63 rooms, six suites, and three chic villas has a sea-view balcony to watch the sailboats and superyachts cruise past.

You can even walk on the wooden plank roof of the curved white structure, which gives the impression of being on board a large ship. It was designed by architect Nikola Bašić, who won the European Prize for Urban Public Space for his Sea Organ, a famous sound art project in Zadar.

During your stay, be sure to make the most of the pools located at the tip of the peninsula and perched above the hotel in the sleek and modern spa.

Tourists flock to Dubrovnik for the history, and to Hvar for the beaches and the party. But many make the mistake of missing the beautiful Istrian peninsula in northern Croatia.

But Meneghetti is a perfect example of the quiet allure of Istria. The Relais & Châteaux property is made up of a majestic white stone manor house and numerous outbuildings, all surrounded by hectares of vines and lush olive trees.

Book an elegantly appointed room in the main hotel. Or splurge with a 1 or 2 bedroom residence with private pool, or a 3 bedroom villa with pool and private garden overlooking the vineyards.

Dine leisurely at the hotel’s gourmet restaurant, which sources as many produce, fresh pastas, cheeses and Istrian delicacies like truffles as it can within a 50 km radius.

There’s no better place to soak up the romantic charm of Rovinj than this sleek, state-of-the-art hotel overlooking the marina. The property offers countless views to take in Rovinj’s cafe-lined promenade, cobbled streets, and imposing bell tower punctuating the skyline.

Dive into the hotel’s impressive rooftop infinity pool. Or ask the hotel to drive you to its beach club on the small wooded island of St. Katarina, where you can swim on the pebble beach and doze under the umbrellas.

The hotel is also the site of the Michelin starred Agli Amici Rovinj restaurant, which offers sparkling views of Rovinj at night and inventive, modern Mediterranean cuisine.