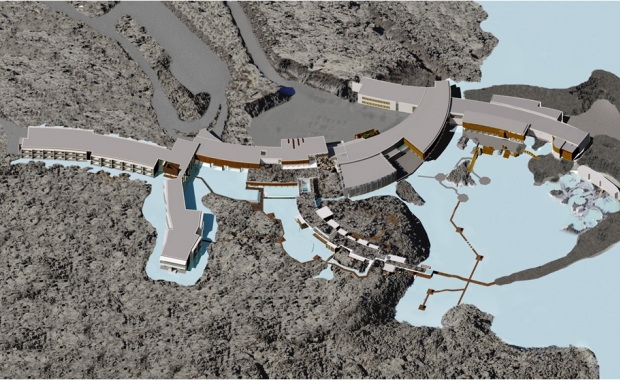 Two five-star hotels will open in the next few years, adding to the range of selections available to foreign visitors to Iceland. Currently, there are no five-star hotels in Iceland. One is a Mariott Hotel that will rise next to Harpan, Reykjavík’s convention and concert hall, near the old harbour. The other is a five star hotel near the Blue Lagoon on the Reykjanes peninsula.

The first five-star hotel to open in Iceland
In the spring of 2017, the blue lagoon will open a 7,500 m2 (80,730 square foot) hotel, which will be Iceland’s first five-star hotel. The hotel, which will be located to the west of the current spa, will have 74 rooms that will have views of the blue lagoon and the nearby lava fields. Construction is already well advanced in the lava field west of the lagoon. The hotel will be connected to the structures by the current spa.

One of the best hotels in the world
A second five-star hotel will rise near the old harbor in downtown Reykjavík. This week, the city of Reykjavík announced that the hotel planned for the site will be a 250-room Marriott Edition Reykjavík. Construction will begin early next year and be completed by 2019, when the hotel is expected to open. Sandeep Walia, regional manager of Marriott, said local newspaper Frettablaðið that the planned hotel “would be, without a doubt, one of the finest hotels in the world”.

The city has worked for years to reach an agreement with foreign investors on the construction of a five-star hotel in the lot next to Harpan. The aim is to strengthen Harpan as a convention center and the tourism industry in downtown Reykjavík.

Dagur told visir.is that the city government stressed that the hotel would add life to the city center and would not be a luxury hotel closed only for the rich, “but a living hotel that remains open to the citizens. With a lively program of cultural events, and remains a part of downtown life, rather than being closed to the city.

Scandic Hell is the world’s most misnamed hotel accommodation

Tornos news | Trivago: Greece in six countries with the most five-star hotels