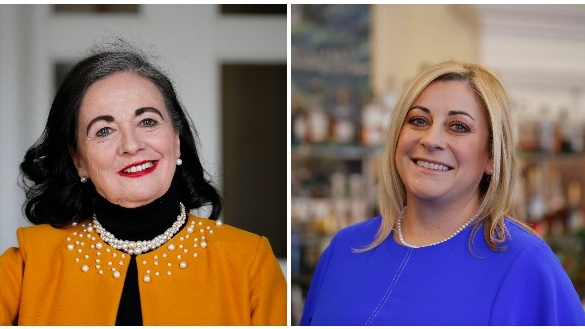 What’s it like selling Ireland’s five-star hotels to tourists?

Paula Carroll is a force of nature, a small woman with a booming voice and an undeniable presence. When she’s in the room, everyone knows it. Heads swivel as it passes. “I feel like the Queen of Sheeba today,” she says, posing for our photographer with an ease that dates back to her days as a child model at the Violet Collins agency in Dublin.

In terms of hospitality, she is indeed regal – a senior member of a select, female-dominated group whose job it is to sell Ireland’s five-star hotels, at home and abroad. “All sales and marketing managers know and support each other tremendously as women,” she says.

Carroll is originally from Dublin but has lived in the west of Ireland since taking up the post of sales and marketing manager at Ashford Castle 31 years ago. Her initial entry into the hospitality industry was with what was then bord fáilte, working as a travel consultant based in London and then Manchester. She also worked for Trusthouse Forte at the Shelbourne Hotel in Dublin, before being recruited to join the team at Ashford Castle. “I’ve only ever had three employers,” she says of her long and distinguished career in hospitality.

Her counterpart at Shelbourne today is Yvonne Donohue, another industry star, who left rural County Galway in the late 1980s to pursue a career in hospitality that began at Mary Bowe’s Marlfield House in County Wexford.

“I did everything, from preparation to recording. Mary was phenomenal, having you arranging flowers one minute and feeding the ducks the next. She truly epitomized Irish hospitality at the time. Roles at the Nuremore, Radisson, Conrad and Westin hotels followed, and nine years ago Donohue received a phone call asking if she was interested in joining the Shelbourne.

I realized that many people depended on our success

“It’s such an iconic hotel, it feels like you care for the duration of your stay here,” she says of the leading lady of St Stephen’s Green, which has been a hotel for 195 years.

Carroll also expresses a sense of responsibility to the Ashford Castle estate and its more than 400 employees. “I took it very seriously from day one. I realized a lot of people depended on our success.

She says the property acquired six years ago by Red Carnation Hotels, founded by South African-born hotelier Beatrice Tollman, “is probably the best thing that happened during my time here. They spent 100 million euros to reinvest in Ashford Castle.

As well as leading the sales and marketing teams at their respective bases, Carroll and Donohue also travel the world, promoting Ireland as a tourist destination and their respective hotels as the best places to see it. “We’re getting such a good reception selling Ireland,” says Donohue. “Ireland today is in the top 10 safest destinations in the world, which is really important to Americans.”

Carroll recalls a time when perceptions were different. “It has become much easier to sell Ireland since the Good Friday agreement; we’re not pointing at a map and saying, “we’re not in that part up there.”

They both agree that while Ireland’s landscapes are very appealing, it’s the people who contribute most to the country’s success as a tourist destination. “The comments I get are that the country is beautiful, but it’s the people that spark lasting memories; Dublin is basically still a very friendly city, and outside the city people are curious and interact with visitors,” says Donohue.

For Carroll, the appeal of Ashford Castle goes beyond its magnificent location and stately rooms – to the “passion and professionalism” of the people who work there and their desire that “all who visit us experience a wonderful experience”.

Donohue mentions a series of strong female role models in his family, who “encouraged me to be my own person”

Neither woman is married, “and I don’t regret it either,” jokes Carroll, and they don’t have any children either. Donohue mentions a series of strong female role models in her family who “encouraged me to be my own person” and not feel pressured to conform to expectations.

“Technically it’s supposed to be an eight-hour day, but it’s not, and the hours are long. I couldn’t do my job if I had young children at home,” says Donohue. She is aware of the demands that family life places on her colleagues and says “there has to be flexibility”. This also extends to male colleagues. “I never want to be seen as favoring women over men, or vice versa.”

There are four men on Donohue’s team of 16, including one who, when asked in an interview where he sees himself in five years, said he wanted his job, eventually – “and That was exactly the answer I was looking for.”

How to successfully start and run an online hotel reservation business